Chris Dunn comes to us from the world of amateur theatre. Having never performed in front of a camera before in anything other than home movies, Chris has taken to it like a duck to water. 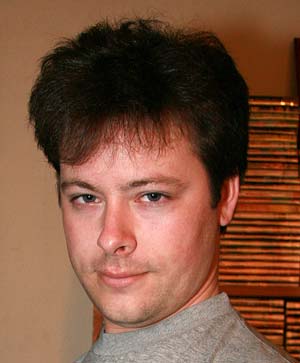 Rodney asked him if he wanted to be in a short film, and before the question was even out of his mouth, Chris had already said "I'll do it!". While his on screen persona might belie little about his true nature, it's his off screen antics that have kept the cast and crew of Schoolyard Justice highly amused. It was this talent that led Rodney to ask him to be a part of this project. A master of the Random Comment, Dunn managed to score a role as assistant cameraman on this project as director Rodney Twelftree was busy setting up scenes and making sure his actors knew what was going on. While initially trepidatious, thinking that he was ruining perfectly good shots, the faith Rodney showed in him paid off, and a fair portion of the film is the result of his steady hand, ability to take direction, and growing confidence in himself as an actor and crewmember.
Chris has recently finished studying at university and is looking forward to the next project he becomes involved in.