Rodney directed his first film in 1992, a school project entitled "Aliens 4", shot with a camera utilising VHS tapes, and edited on a primitive VHS-to-VHS tape deck arrangement. Scarred by this for years, Rodney finally got over his fear of making movies when he purchased a digital camera in 2000, in order to make a film project about golf. Things got in the way, and prevented that project from seeing the light of day, however both Rodney and his brother Warwick formed their own film company, Fernby Films, in order to continue making their projects.
Specialising in short clips and montage packages, Fernby Films allowed Rodney to develop his directorial and editing skill and produce films and clips of increasing quality. 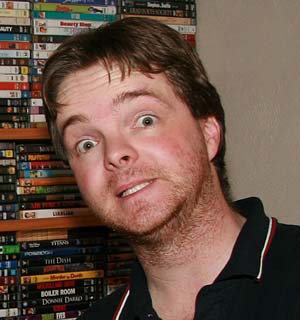 Schoolyard Justice is Rodney's third solo directorial effort at a feature film, and is the result of a year of planning and production. He finds filming and editing on digital video to be a quick and easy way to make a film, compared to the laborious and expensive format of film. He likes to shoot quickly, and spend most of his time in the editing room, cackling like a maniac over his creation.
Once Schoolyard Justice is complete, Rodney is tackling the task of editing a live theatre production onto DVD, and then intends on commencing production on that long lost golf project.

"Filming Schoolyard Justice, like any other project I have been associated with, is both challenging and rewarding. The planning and preparation that goes into even a ten minute short film is incredible, but the end result, to see the reaction from an audience to something that has affected them in some way, is where the effort is worth it."

"This is a story I felt was worth telling, a moral fable for our times. In this day and age, with the dominance of camera and the Internet for distribution of video and images, I felt it was important to make people confront their actions and not merely feel like voyeurs. Not only do the choices we make have consequences, but people need to take ownership of them. Too often nowadays, people will blame others for the actions that they themselves make. This, in a modern society, is a prevailing evil."