Shannon Gray has been performing around Adelaide on the amateur theatre circuit for a number of years, and worked with director Rodney Twelftree on a stage version of As You Like It in 2007. From this, Rodney asked her to play the small role of Jenny in Schoolyard Justice. 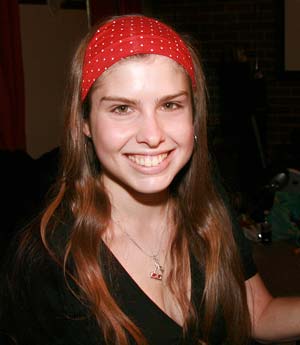 Shannon is currently performing with a professional theatre group across Australia, playing roles in Romeo & Juliet (as Juliet), Macbeth and other works by Shakespeare. She's soon to be seen touring around the country, so keep an eye out for her. And she's being paid to live her lifelong dream, so Shannon is now quite happy.

Shannon prefers to play roles which involve more tragic and mysterious characters, something which Rodney spotted as essential in playing the skanky, bratty teenage sister of Jamie and Jackie. Schoolyard Justice marks the first collaboration with a Fernby Films project, and Shannon is currently looking forward to an increased screen time on the next venture with us.