Schoolyard Justice is a short film about a bully and his intended victim, and the consequences of an attack that leads to a reversal of position and power between the two. Based on an original short story by Lachlan Cupit, and with a screenplay by Rodney Twelftree, SYJ tackles the ideas around violence in the schoolyard, and what people would do if they had the opportunity to "get one back" against their aggressor. 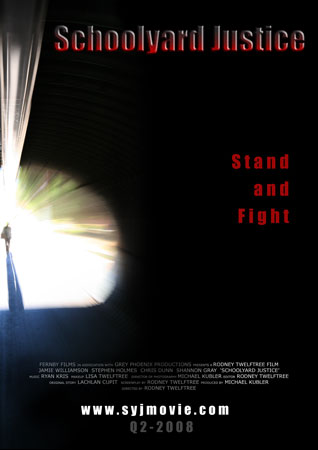 Violence in society is a growing menace, and with the advent of the internet to broadcast attacks on innocent people, the phenomenon has only grown exponentially. The film does not attempt to rationalise or justify violence, instead, as filmmakers we simply ask what you would do if you suddenly had the upper hand over a person who had bullied you. This is the question that is raised constantly in a school environment, and it is this catalyst that has often led to violence between students. By asking the viewer what they would do, we hope that SYJ generates conversations and ideas that will hopefully allow students and teachers to understand what causes this problem, and what can be done about it.

SYJ has been a labour of like for director Rodney Twelftree and producer Michael Kubler, who are keen to use this experience as a springboard to a feature length film to follow.

The first draft of the screenplay was written in March 2007, with a final draft seeing completion in June 07. Casting was done through the scriptwriting period, and initial filming took place in late July, with principal photography continuing into the beginning of 2008, which allowed for cast/crew work commitments and school/uni completion. Pickup shoots took place in Feb 2008, and a final edit was completed by mid-April 08. In early 2008, the soundtrack began to take shape, going through several iterations before the final product was delivered for mixing in April 08.

Following the Web release of SYJ in June 08, the film will be available for purchase on DVD towards the end of 2008, via this website. The DVD will contain extra features as well as the full resolution version of the film.
With permission from Lochy, the original story is available, you may also be interested in the Final Script.