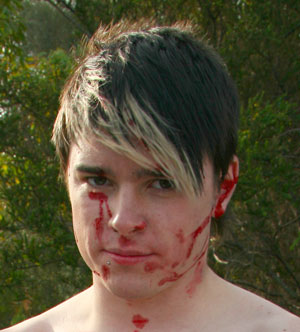 Consequently, he was cast as a bully. His looks suited the part, and his ability in front of the camera allowed director Rodney Twelftree to let the performance carry itself, rather than try and mix things together in the editing room. Holmes might look scary, but in fact, he's really a level headed and easy-going guy. Originally cast whilst still living in the South Australian Riverland, he now resides with a mate in Adelaide. Rodney likes to think he moved to Adelaide for the role, but deep down knows this is not the case.

Holmes' past experience is limited to theatre productions for school and local groups, and this project is his first foray into film/video production. After chatting with the director about other avenues for performance, Holmes may just be appearing on stage around Adelaide in the not to distant future, and Rodney is considering casting him in a role in upcoming projects. Although hopefully, not covering him in fake blood again.

"This stuff is sticky" - referring to being covered in fake blood.