Michael was not always an avid photographer. Before he could drive a car unaccompanied he aquired his private pilots license, however he realised that he wanted to be creative, and make things that can help change the world, or at least peoples perception of it. He then got into robotics and electronics while at high school, and even though he competed in the International Robocup Challenge, he found it more fun to create 3D models and animations of the robots, than put them together. 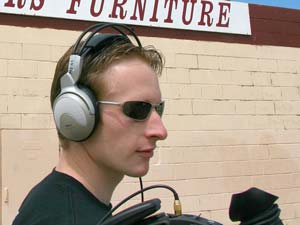 During this time Michael had also been getting into photography, and video editing, and after doing a year of Maths and Computer Science at the University of Adelaide, he realised he didn't like maths so changed to a Bachelor of Arts, specialising in Multimedia Studies at UniSA. Upon learning the theory of composition, framing, and web design (amongst other things). He then left university and used his natural talent for computers to gain a full time job at a local Internet Service Provider, where he has been for over 2 years. Using the money, and his spare time to grow his multimedia company Grey Phoenix Productions, whilst learning PHP programming, and helping Rodney Twelftree produce Thrash Bus 2, and Schoolyard Justice.

During the production of Schoolyard Justice, Michael has taken on a number of roles including :

"I make this look good"