Lachlan is the inspiration behind SYJ, having written the original short story Rodney based the screenplay on. Lochy is a long time friend of Rodneys, having performed previously for Fernby Films in Thrash Bus 2, and appeared in several theatre productions with Rodney over the years. Lochy's main interest these days is youth ministry with his local church, although he still dabbles in theatre and writing every so often. 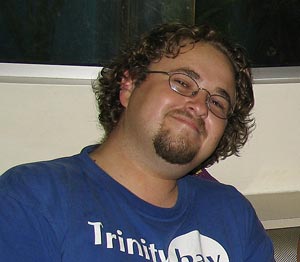 Lochy's input into SYJ has been limited to simply allowing Rodney and Michael to expand and adjust the original concept for the screen. He has stated he would rather see somebody else's ideas on what his story says than try and colour the filmmaking process with his own personal bias. Consequently, Lochy was not involved in the screenplay process, or the filming and production process, in any way.

Lochy's other screen credits for Fernby Films include: Thrash Bus 2, As You Like It Trailer, and Much Ado About Nothing Trailer, all available to view on the Fernby Films website.